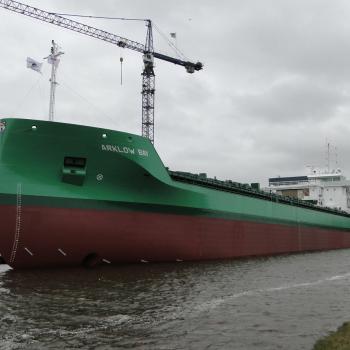 On Friday the 7th of March, M.V. Arklow Bay was successfully launched at the Westerbroek yard of Ferus Smit.

Nb. 410 is christened as ‘Arklow Bay’. She is the second vessel in a series of six that will be delivered to our client from the city of Arklow, Ireland. The design is a bulk oriented general cargo ship that will be mainly employed in the shipment of wheat, corn and other bulk commodities in European waters.

As hull form it was chosen to adapt the ‘bulbless’ principle; creating a slender bow without bulb. Taking into account the various loading drafts and wave conditions to be encountered in service, the total performance of this bow will be better than a bulb optimised for one single draft and flat water only.

This second as well as the next five ships will have the following characteristics: